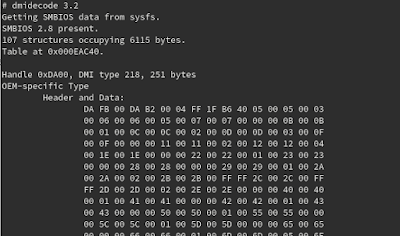 A collection of other bash and Linux commands ... or solutions

There's obviously no point in detailing all of the Linux/Unix/Bash commands available. Here are a few commands or solutions, I wanted to remember.

Get motherboard or DIMM info:
dmidecode reads information from the DMI (desktop management interface) table which is closely related to the SMBIOS (system management BIOS). Need sudo to run:

While loop failing:
I had a problem where I wanted to check ssh on a number of hosts. Simple - cat the file, pipe into while, use ssh with timeout to do the check like this:
cat host_list.txt | while read h; do timeout 3 ssh $h; done

It didn't work. It just hung on the ssh command until timeout cut the command. ssh seemed to be grabbing standard input (and maybe stdout) and interfering with the while loops input. Switching to a for loop helped with the input. Then ssh didn't seem to be the best choice nor did telnet 22. Netcat in a for loop worked best:
nc -v $host 22

Problem solved and the hosts with ssh running were found....

The problem with the above is that it often won't work - the remote service won't be running. This mostly has to do with terminal control. Despite nohup saying that it is redirecting output to nohup.out, there's still a problem. Two easy solutions:
ssh user@remote.host "nohup java example.jar > ./output_file.out 2>&1 &"

This grabs both standard out and standard error and puts them into output_file.out. Of course, another option is to create a systemd (or init.d) script and use that.

The only downside to inotifywait is that inotify-tools often needs to be installed (yum/dnf install or apt install).

To have more info about when commands were run, set HISTTIMEFORMAT